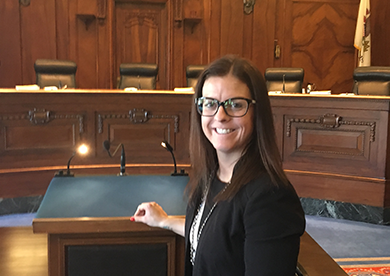 After receiving a negative ruling from the trial court and in the Fourth District Appellate Court, Partner, Miranda Soucie, kept fighting and was able to take her case all the way to the Illinois Supreme Court. Ms. Soucie traveled to Springfield where she argued before the Illinois Supreme Court on behalf of Spiros Law, client, Barbara Monson, against the City of Danville. While the city argued that they were immune from liability, Ms. Soucie argued that they have “the duty to exercise ordinary care to maintain its property in a reasonably safe condition.” The Illinois Supreme Court hears very few cases each year and we were honored one of ours was chosen, and are proud to announce that after much persistence and determination we received a unanimous decision from the Illinois Supreme Court in our client’s favor. “Even after receiving a negative ruling from the trial court and on appeal we didn’t give up” said Miranda Soucie. “We felt strongly about the case and that justice would ultimately prevail.”