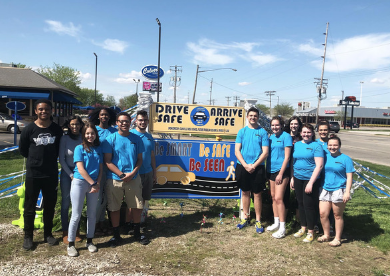 Danville High School’s Future Problem Solvers unveiled their own road safety signs in Danville on Monday. The signs are in conjunction with their project, “Project Ignition: Be the Key to Road Safety”, and their goal is to improve safety on roadways in Danville. The double-sided sign, which is located at the intersection of North Vermilion and Liberty Lane, has one side dedicated to safety in regards to passing school buses and emergency vehicles, and the other side dedicated to pedestrian safety.

Originally, the campaign was focused around “the fatal four” which includes, not wearing a seatbelt, distracted driving, driving under the influence, and speeding. However, the group decided to expand the scope of the campaign to focus on more aspects of drivers safety, giving them the opportunity to educate the community on a wider variety of safety issues.

Senator Scott Bennett attended the dedication, and he was extremely impressed with the group’s dedication to improving safety on their roadways. He stated that he was pleased to see a group of kids putting in the time and effort to make a positive change in their community.

Speaking of time and effort, placing road safety signs around the community was not an easy task for the group. It took over 18 months of planning and fundraising to make their goal a reality, making Monday’s sign dedication extremely exciting for the group. With that said, the Future Problem Solvers are not stopping there. The group will be placing signs at five different locations around Danville with the help of some local sponsors. Spiros Law is proud to be one of those sponsors.

This is not the first time the group is getting attention for their safety efforts. In 2018, the DHS Future Problem Solvers were named State Champions for Project Ignition in the community problem-solving category. In this category, groups of up to 15 students per school follow a six-step problem-solving process to help solve real community challenges. The inspiration for Project Ignition came from the death of a Danville High School student, D’Nija Parker, who was killed in a car accident in October 2016. Since then, the group has implemented many different strategies to get the attention of drivers in Danville, and they hope their new road signs will not only catch the attention of drivers but prompt them to change their behavior behind the wheel.

Spiros Law is a proud sponsor of Project Ignition. To find out more about Project Ignition and the work they have done throughout Danville, check out their Facebook page, here.

Categories: In the Community

The well-being, of our clients, staff, and community, is foremost in our thoughts during this unprecedented time. In order to do our best to help keep everyone as healthy as possible, we are continuing to serve our clients remotely.

While our physical offices will remain closed, we are open for business. Our staff is working remotely to ensure that we are accessible to all our clients and are available to answer questions or provide consultations for potential clients.

If you have questions, you can still call our office number and someone from our team will be there for you. If you need to get any documents to us please take a picture or scan them to our email or text them to us at (217) 443-4343