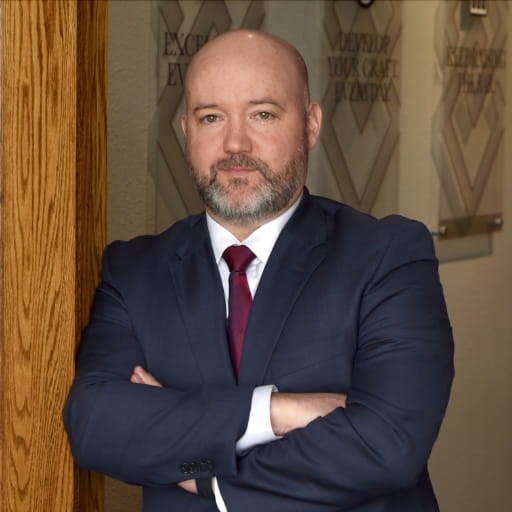 Andrew J. Purcell, a native of Kankakee, returned to his roots after 16 years of practice in Chicago. The rewarding experience of helping injured persons and their families led Andy to join the like-minded team at Spiros Law, P.C. in 2015. He brings his skills as an experienced courtroom lawyer to serve clients in the Kankakee area, Central Illinois, and beyond.

His career includes 12 years, seven years as a partner, at a national law firm in Chicago, where he handled complex cases involving industrial accidents, electrocutions, auto/trucking accidents, fires, explosions, and building collapse. Andy is a fierce advocate in the courtroom and has been involved in 30 trials and more than 100 arbitrations and mediations.

Andy’s results for injury plaintiffs include obtaining a $5 million verdict for a 13-year-old girl who lost her parents and infant brother who were killed in an accident with a tractor-trailer. It was believed to be the largest wrongful death verdict in Dalton County, Georgia at that time. He has obtained favorable settlements for his clients in a variety of cases, ranging from auto accidents to a fatal helicopter crash

He is a graduate of Eastern Illinois University and The John Marshall Law School in Chicago, and was a member of the JMLS Law Review and a national Moot Court competition team.

From 2006 to 2014, Andy was named to Illinois Super Lawyers Magazine’s Rising Stars list, recognizing well-respected attorneys under age 40. In 2019, 2020, 2021, and 2022 Andy was awarded the title of Leading Lawyer from the Chicago Daily Law Bulletin. Andy is a member of the Kankakee County and Illinois State bar associations.

Andy enjoys spending his free time with his wife, three children, and his large extended family. His is also involved in a variety of community organizations including being on the Board of Directors for Bishop McNamara Catholic High School, a member of St. Patrick’s Church in Kankakee and the Co-Chair of the church’s Capital Campaign Committee. He is also a member of the Knights of Columbus Council 745 and was a Co-Chair of the 2009 Kankakee County Courthouse Centennial Celebration.

This firm is great. Andrew Percell is a straight shooter. He knows all the jive but keeps it clear with his clients. I felt like a person there not just a client. I must say I did not expect the compassion and professionalism to blend so well. Go no further this is the team you want on your side.

Mr. Purcell was very impressive in the handling of my case. I suffered a nasty fall in a restaurant resulting in limited use of my right arm & shoulder & a steel plate in my elbow. Mr. Purcell handled the case in an efficient & professional manner which resulted in a settlement which was satisfactory to all parties involved. He kept us informed during the entire process & was available every step of the way.

Andy went Over and beyond. He kept me informed as to what was happening and worked diligently to get me the best settlement for my injury. I would definitely use Spiros Law and Andy’s expertise again, thank you Andy.

I was injured on the job, never had anything happened like this in my life. I jumped through all the hoops a company can make you do. In the end it was suffering on top of suffering and finally surgery. I was very reluctant to seek legal help, didn't know if I was entitled to compensation in the matter. I can't express enough how happy I was I made the call to Spiros Law. Even during this time of pandemic they made everything a piece of cake. Mr Purcell is highly professional, extremely law knowledgeable and overall a very freindly and down to earth person. He helped me in my case 100%. In the end like I said if you are unsure about legal injury help please don't hesitate and call for Andrew Purcell. HIGHLY RECOMMENDED and thank you again personally.

Mr Purcell was always professional, helpful and always answered my questions. This was my first experience hiring a personal injury lawyer and he made it so easy. I will certainly refer him to anyone looking for his expertise.

Andy was very professional. He kept us updated & informed during the entire process. He worked to achieve the best outcome for us. I would highly recommend his services to future clients.

Mr. Purcell is an outstanding lawyer and clearly one of the best in the area. Mr. Purcell handled my case in a very professionally matter. I would gladly recommend him to family and friends.

Andy Purcell made my case as easy as possible on my end. He knew I was dealing with alot of pain and recovery. 10/10 I would recommend giving them a call!

Andrew was very professional and listened closely as my father explained what he wanted. This was not one of the million dollar deals that you read about, but Andrew treated my father and his claim as if it were. He was treated with first-class attention and first-class representation. I appreciated all that Andrew and Spiros Law did for my father.

If you are looking for an attorney to truly represent you in the best way, my experience with Andrew was just that. He always took the time to talk and explain and answer any questions I had. Andrew was quick to address any issues in my case such as making sure the insurance company was paying on time and getting bills paid.

Mr. Purcell was extremely helpful with any questions we had and responded in a timely manner. The service we received was excellent and I highly recommend him.

Andrew did an excellent job on my case when I was in a car accident last year. I was injured and couldn't drive to meet with him so he came to me and always kept me in the loop with what was going on. He is very professional, responsive, and made things as easy for me as possible.